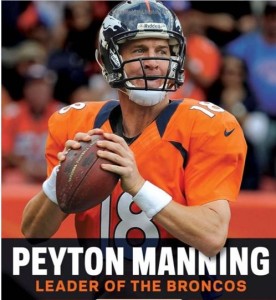 There’s been a lot of discussion and little disagreement about Peyton Manning’s leadership skills.  Raised with solid family values and a passion for athletics, Manning has become one of the most significant sports role models of this era.

Various writers have chosen the qualities they believe stand out in Manning.

Begwold goes on to say, “Manning is the most decorated player in the locker room – a future Hall of Famer who has won a record from MVP awards to go with a Super Bowl – and he also is among the most driven with a legendary work ethic.”

He is also an accountable player, which is an important component for players who are leaders when the rough times come.

According to Gary Bumison, CEO of Kim/Ferry International, he states on  Linked In that Manning “has the intangible that make a leader great”.  Bumison identifies one key attribute he calls “learning agility”.

Learing agility is “the willingness and ability to learn from experience and then apply those lessons to succeed in new situations.  Leaders who are learning agile continuously seek new challenges, solicit direct feedback, self-reflect, and get jobs done resourcefully.”

In his own words, Manning says, “I never left the field saying I could have done more to get ready, and that gives me peace of mind.”

Michelle Baker blogged January 8, 2014 about five characteristics of Manning’s leadership style:  Know your craft, inside and out.  Be open to coaching and feedback.  Don’t let setbacks or mistakes define you.  Raise the bar.  Have fun, and don’t take yourself too seriously.

Manning also states in his book,  Manning, that his priorities are faith, family, friends, and football.  He goes on to say that football never moves above the fourth position.  He is a man with clearly defined priorities.

For a quick reference to the 20 attributes go to Peyton Manning Guide to Leadership and Living Well.

With over 30 years experience, Susie is here to help you become FREED from Stuck! Whether it’s counseling (psychotherapy), hypnosis, sex therapy/education, business or life coaching, she can help you “access internal resources you never knew you had, to create what you never knew you could”. If you really desire to live a better quality of life, contact Susie now. She’s here to help you through the pain and frustration, to release the blocks you’re experiencing, and to move to a place of action and success in your life. Contact Susie Now for Your Free Initial Consultation